Naragonia’s Pascale Rubens and Toon Van Mierlo present a delicious feast of beautiful music for your dancing and listening pleasure. Naragonia’s music ranges from intimate and delicate to voluptuous and passionate and is pervaded by a timeless and steady energy. You won’t want to miss a single note.

Naragonia was formed in 2003 at the Andanças Festival in Portugal and have recorded since then 8 albums . In addition to playing in their home country of Belgium, Naragonia has toured through whole Europe.

Their impact on the European folkscene cannot be underestimated. They are an inspiration to numerous musicians and many of their numbers have been covered or recorded. Not just by Belgian musicians but also by those abroad from Portugal to Russia, from Sweden to the USA….Some of Naragonia’s numbers become real signature tunes.

Over the past years different collaborations within the Arts have come to fruition. Theatre (Tal en Thee and Theater de Spiegel), musicians and bands from abroad (Fernhill, Andy Cutting, Paulo Lameiro, Gregory Jolivet to name but a few…) have all taken part in these ventures. All rich encounters; encompassing travel to new lands to meet new people and to form new tales. 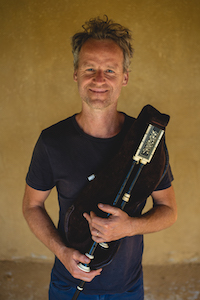 Toon Van Mierlo studied oboe for several years as a child at the music academy in Turnhout. Ten years later at twenty-one, Toon fell head-over-heels for uillean pipes (Irish bagpipes). French pipes, clarinet, soprano sax, and button accordion soon followed. In 2003, Toon joined the band Fluxus and after that was soon asked to join Floes, Embrun, Harakiwi, Manimoen, and other bands. Today he plays with Naragonia, Naragonia Quartet, Hot Griselda, and occasionally in Amorroma. Toon has recorded eight albums with these groups and played as a guest artist on many more. Toon teaches bagpipes at the music academie of Genk and at workshops worldwide.In zijn jeugdjaren volgde Toon Van Mierlo hobo aan de academie van Turnhout. 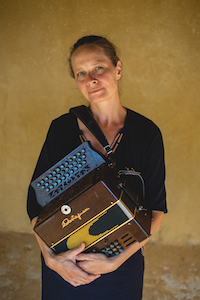 Pascale Rubens began playing classical violin when she was only nine years old but at eighteen fell in love with the button accordion. In 1999 she began the duo Musaraigne with cellist Hannes Pouseele. In 2005, the duo released their first album, “Convoi exceptional”, and represented Belgium in the International Radio Festival in Gdansk. In 2002, Pascale became the box player for the band Griff, who also released a debut album in 2005. In 2003 Pascale and Toon formed their duo. Naragonia quickly gained popularity in the folk world, both in Belgium and abroad. In 2020 she started a new duo with her sister Véronique Rubens: Systrar. Pascale teaches button accordion at Schoten and Genk music schools and is in demand as a workshop instructor worldwide.